Regular followers of the Woodlore blog may well be familiar with the name John van Zanen thanks to his fantastic hammock-making guide, which we posted on these pages last year. Well, John has been busy once again, this time sharing his enthusiasm and bushcraft skills with a group of scout leaders in his homeland of the Netherlands. Here he shares with us photos and videos of the group working together to create a hangi – a traditional Maori method of cooking food outdoors in a heated pit oven:

I attended the Woodlore Camp Craft course in 2011 and was challenged by your team to spread the knowledge of bushcraft. Not long after, I spent a few days with a group of scout leaders to teach them some of the skills I have learnt in the past years attending courses with Woodlore.

Each year, scout leaders come together to open the new season and to get new energy and inspiration for the year to come. This year I was invited to join them and teach some bushcraft skills. We talked about quite a few topics, but the highlight of the weekend was surely eating the food from a hangi. Instead of rocks, we used bricks and covered the pit with wet towels, branches and soil. The result was really great and the food tasted fantastic. During the four hours that the food was cooking underground, we all carved a spoon to eat our dinner with. 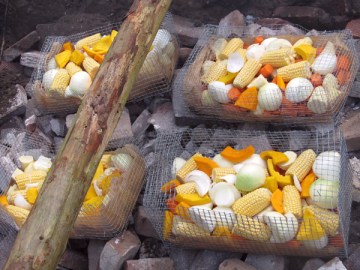 The prepared food in steel baskets, ready for cooking 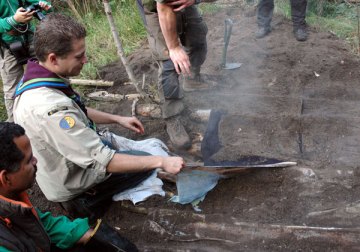 Digging up the hangi after cooking

During the process a number of videos were made, which you can view via the following links:

Here is a list of all the stuff we used to make the hangi:

2 thoughts on “A Hangi Making Guide by John van Zanen”

There was an error retrieving images from Instagram. An attempt will be remade in a few minutes.