On Aspirant Instructor Sarah Day’s return home, the first aid training she had recieved left her feeling reflective. Here are her thoughts:

It’s not often that the whole team gets together; we often go a whole season without seeing certain people – apart from chance meetings at the beginning and end of courses.

One of the best aspects, both of our annual training weeks and of the end of season get-together, is that we can all share our stories of the season, and what we’ve been up to over the winter. As an inevitable and very helpful part of our regular first aid training, we often exchange stories of first aid incidents we’ve dealt with, (or even been the victim of!).  It’s natural to try and analyse an incident afterwards, whether it was real or a training scenario, and think about what you might do differently another time. I often think about two incidents I was involved in several years ago.

The first incident was at an off-roading day, shortly before I started work at Woodlore. It was January and freezing cold – not unlike our training week in fact! A Range Rover was being driven through a fairly deep pond when it became stuck. Icy water must have begun seeping under the doors, and a small boy of 5 or so stood up in the passenger seat and started banging on the window, then passed out. Some bystanders waded in and laid him on the bank. Having got him out of the car, none of them seemed to know what to do. I wandered over and offered to help, unsure what I could really do – he was so pale he had turned green, and was shaking, his eyes open but rolled back in his head and still lying on the ground in his wet clothes. I picked him up and laid him on my lap so he was at least off the ground, then jammed a borrowed hat on his head to try and keep him warm. He didn’t respond to any questions but did grip my hand. No one could offer any useful information such as his name, or if he suffered from any medical problems. His dad eventually got out of the car and waded over, picked the boy up and began shaking him violently in panic, then urged by a couple of others ran off  to take the boy to hospital. To this day I don’t know what was wrong with him but it still bugs me that I didn’t do more.

By contrast, a couple of years later, after at least one first aid training session, I was in town when a man came running into the shop shouting “Can somebody help, there’s someone on the floor!” I ran out of the shop to see a man collapsed on the pavement, having a seizure. His head was banging on the floor, so I immediately knelt down and tried to shield it with my hands. At the same time another woman knelt at his side. It was a slightly awkward moment, and we both spoke at the same time. She was an Army medic, and I briefly explained what training I’d had. She ordered the bystanders back and told one to call an ambulance and stay nearby to relay information. I stayed at the mans head, helping to keep bystanders back, checking his neck for a medical necklace and ‘witnessing’ when the other lady checked through his wallet for any information on his condition. The seizure stopped and he started to come round; because he had fallen on his arm, it had been grazed during the seizure and he immediately tried to move. The bloke on the phone shouted that he mustn’t get up, but we let him move into a more comfortable position. We helped him to sit up, but kept him still and talked to him. The ambulance arrived, we handed over, told what little we knew about what had happened, and that was that.

Both incidents were a bit unnerving, though not in themselves really that serious. But when I think about the little boy at the off-roading day I still wonder what more I should have done and it nags at me. The second incident, I can think about without the slightest qualm; I hope the man was alright, but I know that both the Army medic and myself dealt with it well and I would not have done anything different if faced with the same situation again.

It’s a horrible feeling, wanting to help but not knowing what to do, or beating yourself up after the event knowing you could have done more. Most of you reading this have probably experienced it at some point. Several members of the field team who have dealt with serious incidents outside of work have said they almost went into auto-pilot, it was just like a training scenario. I suppose the slight nagging doubts you feel afterwards, when you think over a situation, are always going to be there. But it makes a huge difference knowing you acted correctly, did the right things and did it well, and hopefully this means you will never feel the torment of standing by and wishing you could be more useful. First aid my not be as glamorous as learning to light fire by friction, or track animals (though we do our best!) but it is incredibly important. You can flick through a manual, and run over DRSABC as many times as you like but nothing beats actually doing it. Only good solid training will counteract the paralysing, mind-blanking panic so that the correct procedures become almost second nature. If a member of your family or a friend or colleague needed help, would you really know what to do? 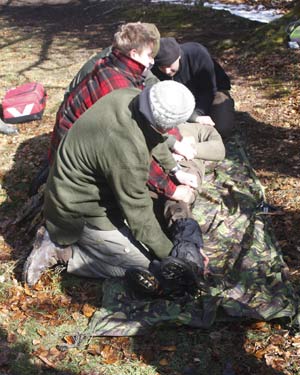 Occasionally over the last year or two I’ve heard the phrase ‘Urban Bushcraft’ and thought, surely it’s a bit of an oxymoron? Bushcraft  is a set of skills that can allow you to experience wild places in a wonderfully full way, seeing and understanding more and being a part of where you are in a way that is unlike ‘normal’ camping.

But then, why shouldn’t the skills be transferrable to urban life? With a bit of imagination you can practice most of them in an urban environment, though some of their actual uses may seem limited.

First aid and navigation are the most obviously useful skills; in a city like London with however many millions of people the chances of being nearby when someone collapses/gets hit by a car/gets bloodied in a fight is probably fairly high. Likewise, navigation – using observational skills to keep tabs on where you are, despite the urgings of a misguided satnav – is very useful, (never mind the nightmare scenarios of cars breaking down in a phone signal deadspot on the way to Christmas at Auntie Mauds and having to walk to the nearest house to use the phone with nothing but a button-compass-on-a-keyring and AA road map…).

But more than that, learning these ancient skills in the company of like-minded people teaches perseverance, resourcefulness, self-reliance, creativity, teamwork, leadership, and helps build confidence – all attributes that crop up as desirable buzzwords in the heady world of the urban jungle.