Our wonderful waterways are now being accessed and enjoyed by more people than ever. The rivers teem with canoeists, kayakers and paddle boarders, as well as the traditional rowers and anglers. Most are aware to some degree of the risks of sharp (often man-made) debris in the river, fallen trees, and the hazard of the water itself – even that of Weil’s disease – but many are unfamiliar with the harm that their own actions can cause to the ecosystem and how they can avoid doing so.

I was paddling recently in the River Stour in Suffolk, near Langham. My partner spotted a jawbone (probably from a cow) on the river bed of the shallow section and picked it out to show me. It wasn’t the worn teeth and odd hole through the side that I noticed first though – it was the tiny, striped mollusc shell clinging to the bone. 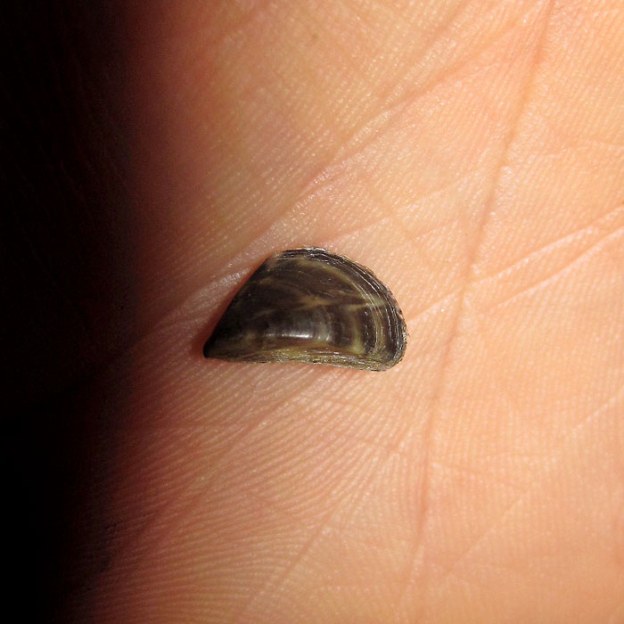 The zebra mussell found by Sarah

I recognised it from the warning poster I’d seen at Alton Water the week before. It was almost certainly a zebra mussel; an invasive species of freshwater mussel, native to Russia, that probably came here originally in the ballast water of ships. It is small but prolific, and can totally clog up water treatment plants, kill native swan mussels, and cause lake beaches to become virtually unusable due to the swathes of sharp shell fragments.

The introduction of mussels also changes the basic ecology of lakes by clearing the water. This allows more light to enter the water, thus increasing the growth of certain water plants, which in turn cause water quality issues. The fish that can feed on these mussels do so voraciously, inevitably leaving other fish deprived. As such, the balance of species often changes, which then has a knock-on effect on the species that feed on them.

The species is already a problem in many of the waterways and lakes in Britain and Ireland, Europe and North America, and they are spreading. 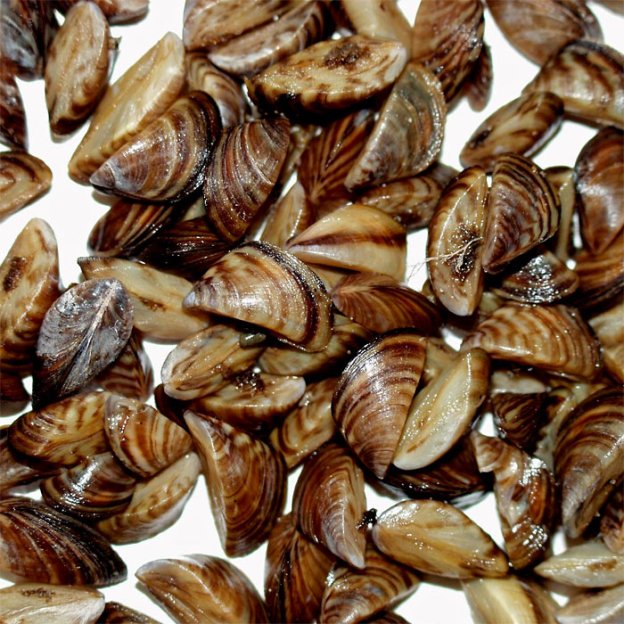 As far as I am aware, the mussel I spotted was the first sighting of them in the Stour. It will be virtually impossible to kill them off or prevent them from colonising the whole river, but how did they get there in the first place? While there are other possibilities, the most likely route is via equipment and river craft that had previously been used in infested waters and not properly cleaned. Therefore it is very important that all river users are aware of this threat and do all they can to minimise it.

The following advice has been taken from this article; obviously aimed at motor boat users in North America, but easily adaptable to other craft and water activities:

Recognition: Zebra mussels are shaped more like the saltwater mussels we are familiar with as a food, though more angular and usually smaller. They can grow up to 2 cm in length, but are often only about the size of a thumbnail (the one I found was about 7 mm long). Their name comes from the striped pattern of their shells, though this is not always present – they can be plain buff or plain dark brown.

The three common colourings of the zebra mussell. Image via wikipedia.org

If you find zebra mussels, especially on a river where they have not previously been reported, photograph the specimen and report it to the Environment Agency.

No doubt some of you will be interested in these critters as a food source… Although they are technically edible, it is known that, as a filter feeder, especially in the more restricted inland waterways, they can accumulate dangerous levels (30,000 times the environmental level) of pollutants in their bodies. This is then passed up the food chain, as well as being excreted to form sediments, which are then consumed by other species and passed up the food chain in that way. Therefore I would urge caution.