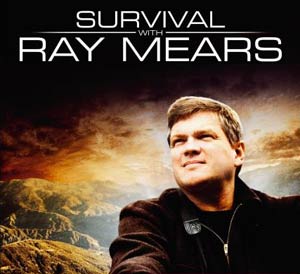 For those of you who are looking forward to the start of Ray’s new series this Sunday, April 18th, here’s a sneak-peek at the episode synopsis for the first programme, Leopards:

In the first episode of Survival, Ray Mears arrives in Namibia’s vast central highland plain, a territory he describes as ‘one of nature’s richest environments’, to track his favourite predator: the leopard.

“They’re loners that roam huge territories, they’re perfectly camouflaged for disappearing into the thorny scrub, and as if that didn’t make them hard enough to follow, they’re most active under the cover of darkness. For a tracker, they are quite simply the ultimate challenge.”

The leopard is renowned for its strength, cunning and, above all else, its stealth, but because it is the most elusive big cat Ray believes it is also ‘hardly understood.’ So will his tracking skills help him find leopards and give us a better understanding of their habits?

In this film, Ray joins a pioneering leopard research project. Based at the Erindi Game Reserve, the project aims to monitor leopard populations and help save their lives.

The reserve is surrounded by farmland and leopards that stray onto them risk being shot, by farmers anxious to protect their livestock.

Natasha De Woronin, who runs the Global Leopard Project, has managed to fit radio collars to female leopards to help her build a map of their movements across the reserve’s 270 square miles. But she needs Ray’s expert tracking skills to help find male leopards, which have so far completely eluded her, and remain a mystery that she is desperate to solve.

Natasha says: “There are a lot of dangers out there. Definitely we have conflict between leopard and farmers, because they will take livestock as part of their natural prey. It’s just another food source to them; they don’t know it belongs to somebody.”

Ray is joined by his duo of experienced wildlife camera men – Isaac Babcock and Shane Moore. Their first step is to find a young female called Honey. Natasha has studied her since birth, has a close relationship with her, and suspects that she is starting to establish her independence, which can be a very dangerous time.

As they sit no more than 15 metres from the wild leopard, Natasha says: “I think you become even more emotionally attached to these cats when you realise how fragile everything really is. And for her, she’s just now growing up. I don’t know where we go from here. What when she meets her first male? Will she know what to do? You don’t know.”

Honey now roams a patch of land that used to belong to her mother, who Natasha calls Phantom.

Natasha explains: “When a daughter becomes independent, what appears to happen is that the mother gives the daughter a piece of territory. But to allow that, Phantom’s now had to move out of the reserve.”

Phantom’s new territory now overlaps farmland, raising concerns because she has not been sighted for weeks.

Natasha and Ray arrive at a farm, separated from the game reserve by an electrified fence with 9,000 volts running through it, to try to establish whether or not one of her study leopards is responsible for an attack on livestock. Ray quickly identifies the tracks in the dirt around the carcasses as hyena and cheetah.

He says: “It looks to me as though the leopard gets the blame all the time and maybe he’s not always the culprit.”

The film crew also follow another known female called Yana, in the hope that her efforts to attract a mate will lead them to a male. They leave their vehicles behind and track on foot, through dried up riverbeds, known as drainage lines, which leopards and other animals use like highways.

Ray says: “This is the best newspaper in the world. You don’t buy it in the street corner; you can’t get it on the internet. It’s something you have to come out and feel and experience.”

Ray finds both female and male tracks. He thinks the male could be a particularly large specimen and they dub him ‘Houdini’, after Natasha speculates he could be the same male who has previously twice evaded capture. They set out on his trail in the hope of fitting him with a radio collar, which could prove pivotal in the project’s efforts to monitor and safeguard the reserve’s leopard population.

After a failed attempt at luring him into a trap, they head north and film at a watering hole where the night vision cameras capture the wealth of wildlife present.

Ray says: “To the human eye the African bush in darkness is just pitch black. You’ve no idea what’s out there. You feel threatened and intimidated. It’s a dangerous place.

With our special night camera, we get a view of the wilderness as the nocturnal animals see it. It’s really spooky hearing that sound. It goes right through you; touches some primal nerve deep inside our souls.”

By trailing Honey, who is now on heat, they come closer to another male leopard. Seeing and filming Honey and her mate provides a real highpoint for Ray.

He says: “The leopard is the super stealth predator and to be able to see it moving around, at night – so, so, incredible.”

He adds: “I can’t tell you. That is one of the highlights of my life. You know, tracking can tell you some things, but you can’t fill in all the pieces. For that you have to come out and observe the animals.”

But as they approach their final night of filming, they have yet to capture, either on camera, or in a trap, Houdini, the area’s dominant male leopard. The crew take their positions at the waterhole for a final vigil in the hope of a sighting of the elusive creature. Will they finally be rewarded?

Ray says: “Ever since I started tracking foxes as a boy, I don’t think I’ve been so excited about tracking anything as I have tracking leopards here. I’ve gained a unique insight into the personalities of the things I follow. So I haven’t just been following animals moving. In this case I’ve been able to follow individuals and that has been truly remarkable.”